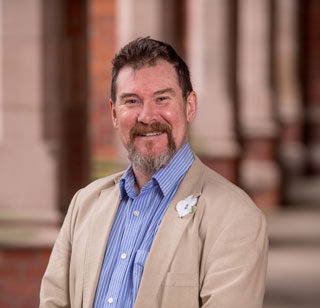 John Barry is Professor of Green Political Economy in the School of History, Anthropology, Philosophy and Politics and Director of the Centre for Sustainability, Equality and Climate Action at Queens University Belfast.  His areas of research include green moral and political theory; green, post-growth and heterodox political economy; the politics, policy and political economy of climate breakdown and low carbon energy transitions; normative aspects of environmental and sustainable development politics and policy; action and engaged research; the greening of citizenship and civic republicanism.

Author of several book including ‘The Politics of Actually Existing Unsustainability: Human Flourishing in a Climate-Changed, Carbon-Constrained World’ (2012, Oxford University Press), Barry is the Belfast lead for the 5 year ESRC funded ‘Place Based Climate Action Network’ (2019-2023); a central element of which will be the establishing Belfast City Energy Transition and Climate Commission, which will have a strong Just Transition focus. He is also work package lead on several other projects including around ‘Understanding Consumer Behaviour and a ‘Just Transition’ beyond Plastic Waste’ and ‘StreetZero: Roadmaps to Zero Net Emissions in Urban Public Transport’.

Barry is a director/board member of Sustainable Northern Ireland, Training for Women Network and Green Foundation Ireland. He is a strong advocate and practitioner of transdisciplinary and action research and green and civic activism.

Education in turbulent times: Navigating the transition from un-sustainability

Building on their 2015 paper ‘Environmental Education and Education for Sustainable Development: Moving toward the Future: ESD and the Building of Resilient Communities’ (In: International Encyclopedia of the Social & Behavioral Sciences, 2nd Edition, Elsevier), where they reflect on the context, content and processes of Education for Sustainable Development, Therese Hume and John Barry seek to envisage a navigational path for the transition from un-sustainability, and how this might impact on higher education.